Meet GOGO Band, the world’s most advanced solution designed to help keep your child dry and stop bedwetting for good.

Nocturnal enuresis, also called bedwetting, is involuntary urination while asleep after the age at which bladder control usually begins. The National Sleep Foundation and the Children’s Hospital of Boston estimate that between five and seven million children in the United States wet their beds on a regular basis, which accounts for 10% of the United States population of children.

When the client came in with all these facts and research, I could not wait to start the work. As a designer, you dream of working on a project where you can help people. To be frank, I never thought it would be bedwetting. For this to be an actual everyday problem for some people throughout their entire lives was mind blowing.

GOGO Band monitors key biometric signals as your child sleeps, learning their body’s natural patterns that signal their need to urinate. Adapting to your child’s unique biology, GOGO Band offers a personalized solution to predict bedwetting and keep them dry.

Setting up goals and expectations. How to design the parent app?

The GoGoBand team cares and they know what they want. During the meetings and questions I always try to do some quick sketches to get a feeling of what the app needs to do.

The client already had done some user testing and based on that data the app is to have two modes. Training mode and regular mode.

It was important to have a training mode because it helps the parent set up the device. After the training, the parent should be able to track wet and dry nights on a calendar and see improvements through charts. The parent should also receive alarms to their phone if their child is about to wet the bed so that they may assist their child in getting to the bathroom.

The biggest challenge was the training mode. The data output was big but the screen ever so small. It was important to inform the parent about the device status as well about what happened last night. How many nights were wet and dry. What is the progress of the training mode? Did they reach the target? 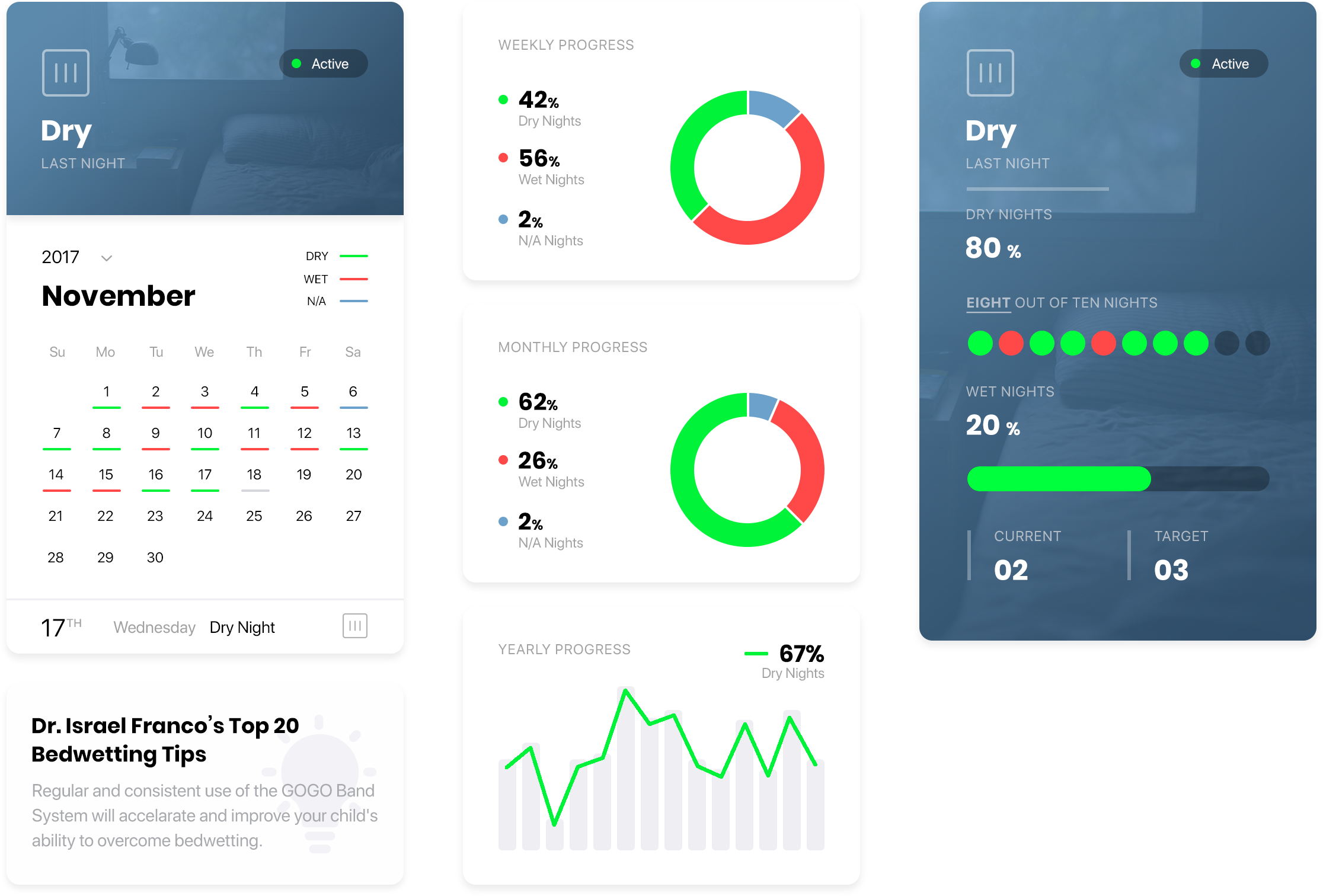 Cards are a popular design pattern. One of the most obvious reasons is that card design is ideally suited to all sorts of screen sizes.

Was the design a success?

The design was built out to show the information in a card layout. It also helped separate the app in two modes. It is based on a grid, but the items, or cards, are compartmentalized in such a way that they feel like separate entities.

The separation is often achieved by using shadows, which gives the illusion of depth, or a slight color difference. In this case I used an appropriate image as a background.

Everyone was happy with the outcome. The client, the development team, even I. We built a prototype and sent it out for the second round of user testing. Real people, real outcomes, real feedback.

After the second round of user testing, the feedback revealed some surprising stuff. There were problems with the training mode.

The user didn’t understand was the device active or inactive. All percentages and separations were confusing and hard to read. As a designer bringing all this to the small screen was so much fun but the feedback was there, raw and honest. The idea of all these data points being important was a failure. 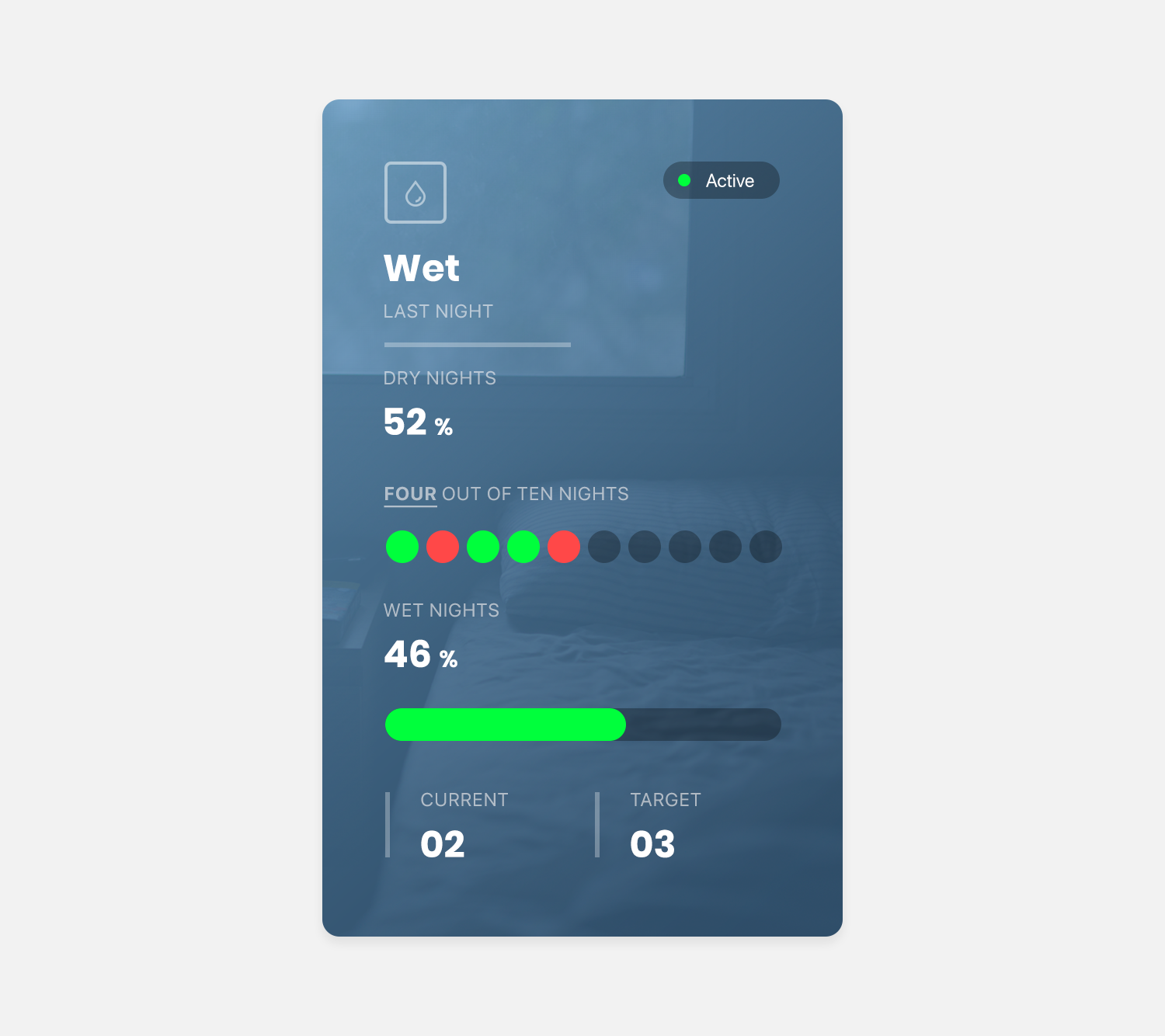 No one likes new interfaces. If you have a ton of data and you want to welcome someone to a new environment do it in a simpler way. Less is more.

Combine the active and training mode into one unity. Make sure the device status is clear.

Use a consistent visual language. The circle charts are presenting valuable data thus use the same circle chart as an idea to show progress. The parent now can track all data points from one screen.

This proved to be a success.

Don’t be afraid to test, retest and mix things up because failure is inevitable. From design to development, together with coshx we delivered Android and iOS mobile applications in 8 weeks.